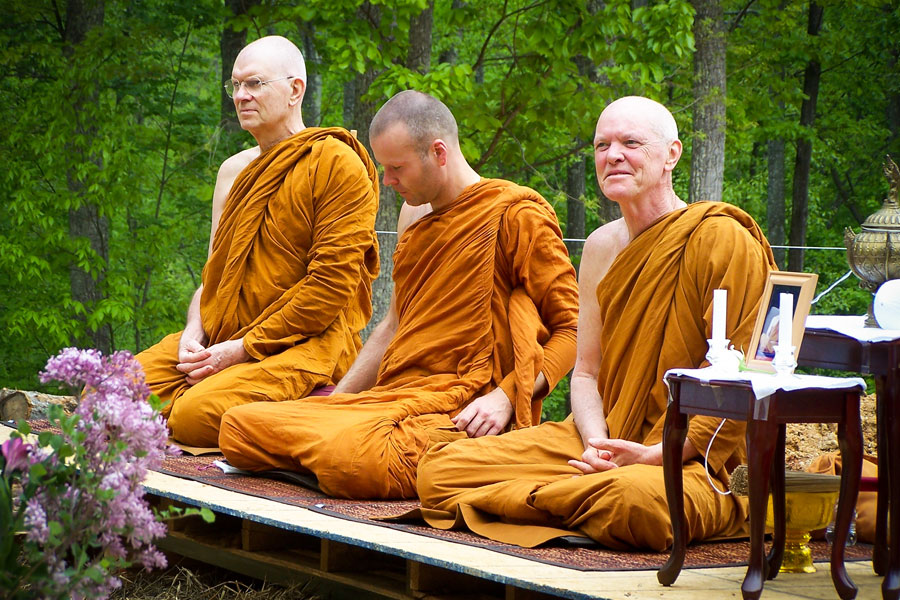 Ajaan Dick Sīlaratano was born at Winchester, Virginia in 1948. After graduating from the University of Texas in 1970, he became disillusioned with academia. Abandoning plans for graduate school, he began instead to travel the world in search of spiritual fulfillment. After several detours, his wanderings eventually took him to India and Sri Lanka in 1975. Along the way he had chanced upon The Heart of Buddhist Meditation by Ven. Ñānaponika Thera, which so inspired his nascent interest in Buddhist practice that he went to stay with Ven. Ñānaponika for a short time at the Forest Hermitage outside of Kandy. Eventually returning to India, he asked permission to stay with Ven. Buddharakkhita Thera at the Mahā Bodhi Society in Bangalore. Following several months of intensive meditation, he requested the “Going Forth” under the tutelage of Ven. Buddharakkhita Thera on Visākha Pūja Day, 1975 and soon became Sāmanera Sangharatana.

While still ordained as a novice, he moved to Sri Lanka in late 1975. He first stayed with Ven. Nārada Thera at Vajirarāma on the outskirts of Colombo. There he met Ven. Ñānavimala Thera, a German monk known for his ascetic practices and wandering lifestyle, who insisted that he first ground his practice in a study of the discourses recorded in the Pāli Canon and of the rules of monastic discipline. Following Ven. Ñānavimala’s recommendation, Sāmanera Sangharatana moved to Sri Vajirañāna Dharmāyatanaya in Maharagama. There he received full bhikkhu ordination (upasampadā) in June of 1976 with Madihe Paññāsiha Mahā Nāyaka as his preceptor (upajjhāya). Having completed his first rains, Bhikkhu Sangharatana paid a second visit to Ven. Ñānaponika Thera in Kandy. This time he met Bhikkhu Bodhi, who gave him a copy of the book Forest Dhamma, a compilation of Dhamma talks given by Ven. Ajaan Mahā Boowa Ñānasampanno and translated from Thai into English by Ven. Ajaan Paññāvaḍḍho.

Inspired by his first encounter with the “forest” Dhamma of the Thai Forest Tradition, Bhikkhu Sangharatana took leave of his upajjhāya and traveled to Thailand in early 1977. He took up residence at Wat Bovornives Vihāra in Bangkok, where he was re-ordained into the Dhammayut Nikāya on April 21, 1977 with Somdet Phra Ñānasamvara as his upajjhāya. His ordination name was changed to Sīlaratano for that ceremony. He soon moved to Baan Taad Forest Monastery in the northeastern province of Udon Thani and was accepted as a student by Ajaan Mahā Boowa. He remained there for seventeen years, serving as Ajaan Mahā Boowa’s attendant monk, before going off on his own to practice in the seclusion of the mountains and forests.

Shortly before Ajaan Mahā Boowa passed away in January 2011, Ajaan Dick Sīlaratano decided the time was right to set up a branch monastery in the lineage of Ajaan Mahā Boowa in America. With the help of supporters in the United States and around the world, Ajaan Dick and a dedicated group of monks and lay volunteers began building Forest Dhamma Monastery in the mountains of southwestern Virginia. The Monastery is an officially sanctioned member of the Dhammayut Order of the United States, and Ajaan Dick is the Abbot.

Ajaan Dick Sīlaratano has been writing English translations of biographies of Thai Forest meditation masters and books on Buddhist meditation as taught in the Thai Forest Tradition for many years. He has translated and authored several books, including Ācariya Mun Bhūridatta Thera: A Spiritual Biography, Arahattamagga Arahattaphala: The Path to Arahantship, Mae Chee Kaew: Her Journey to Spiritual Awakening & Enlightenment, Samana and Uncommon Wisdom: Life and Teachings of Ajaan Paññāvaḍḍho.