Forest Dhamma Monastery’s new logo was designed and executed by Mae Chee Melita, a nun resident at the monastery for the past five years and an original member of our sangha. A graphic designer by training, she explains the spiritual principles that form the basis of our logo in this way:

After his enlightenment, the Buddha delivered his first discourse to the group of five ascetics in the Deer Park at Isipatana near Benares. In doing so, the Buddha set in motion the Wheel of Dhamma, which is symbolically represented by the Dhammacakka ― the Eight-Spoked Dhamma Wheel. 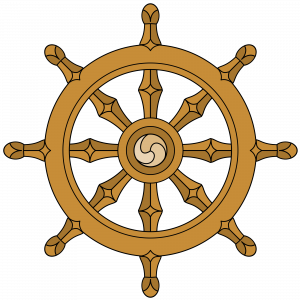 The Dhammacakka is the universal symbol for the Buddhist religion, and by extension, Buddhist monasteries and Buddhist organizations around the world. The Dhammacakka is well suited for that purpose as it speaks to the complete range of the Buddha’s teachings. However, that symbol has been used so often in logo designs that it is hard to differentiate one Buddhist logo from another.

In creating the Forest Dhamma logo, we have endeavored to work with basic concepts in a way that makes our logo unique among Buddhist symbols by focusing on the central theme of the noble eightfold path, the three swirling segments in the circle at the center of Dhammacakka image: sīla, samādhi and paññā. Taken together, these three concepts are the main inspiration behind our logo. Being a summary of the noble eightfold path, sīla, samādhi, and paññā together represent the essence of the Buddha’s teaching, just as they form the heart of the Dhammacakka.

Sīla, samādhi, paññā can be said to characterize the pervading atmosphere at Forest Dhamma Monastery, as these practices are the main focus in everything we do, say and think. Since the monastery’s beginnings, Ajaan Dick Sīlaratano has instilled in all of his disciples the importance of practicing sīla, samādhi and paññā in every aspect of their daily lives, whether in building the monastery’s infrastructure, in working in the kitchen or in the garden, in performing monastic duties and chores, or in practicing formal meditation. All of which makes the use sīla, samādhi and paññā very appropriate as the focus of our logo.

The logo’s three round dots are positioned right above the midpoint between the ‘s’ and the ‘t’ in the word “Forest,” and the center of the dots is positioned exactly at the start of the ‘M’ in the word “Monastery” underneath. This is done not only for aesthetic purposes, but also to show structure and order. This sense of structure is a feature of all the buildings in Forest Dhamma Monastery, which further harmonizes with a quality of being well-organized that is found in the design of the monastery as a whole. Subjectively, this sense of harmony is also a feature of Forest Dhamma’s monastic community, expressing how we carry ourselves in our everyday practice. 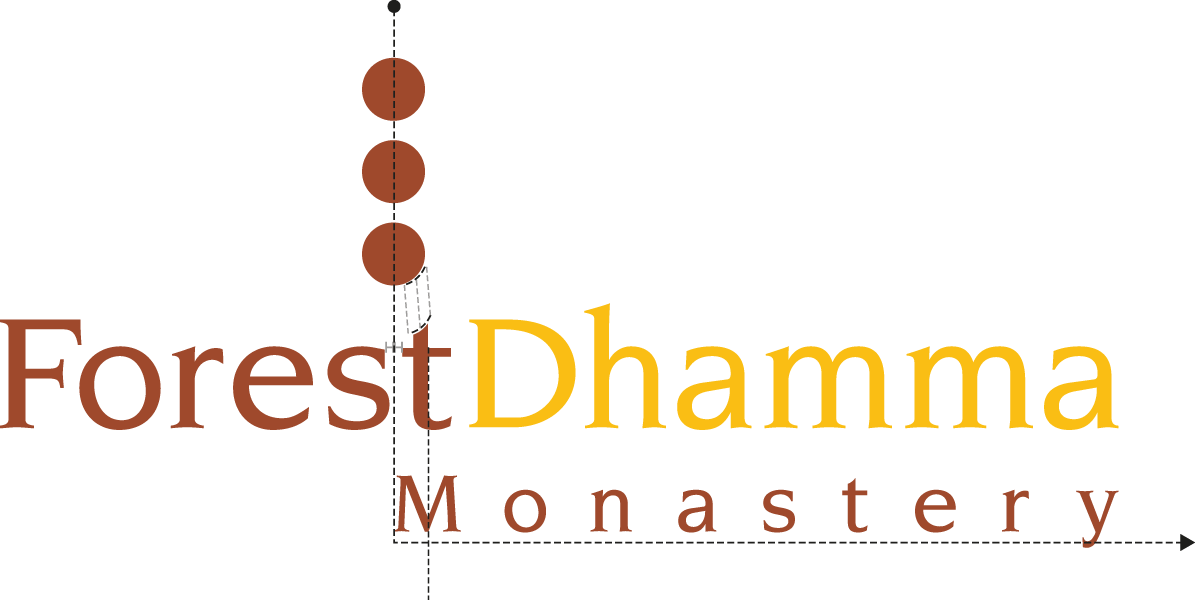 The three dots in a single solid color show Forest Dhamma Monastery to be a place of simplicity, solidity and strength. Simple round dots were chosen instead of a more complex design to emphasize these fundamental grounding qualities.

The color brown of the dots was chosen for its identification with the outdoor environment of woods and forests. The brown color also portrays boldness and seriousness of purpose. The yellow-orange color in the wordmark was chosen to represent the light of Dhamma, the light of the teaching. Both brown and yellow-orange are important parts of the color family of Buddhist monks’ robes. For these reasons, they fit well with the concept behind the logo itself.

The font chosen for the logotype also shows the same characteristics: bold, simple, elegant and strong, rather than stiff or rigid. The font is also gender-neutral; it does not lean heavily toward either masculine or feminine features. The font is serif in character, which shows seriousness, strength and boldness. But at the same time there is a curve at the end of each character that gives the font a certain softness and flexibility. The font has a strong conceptual connection with the spirit of Forest Dhamma Monastery, highlighting the fact that even though it is a serious, grounded and orderly place to live, the community is also flexible, always trying to do everything with the wisdom of the middle path.

Forest Dhamma Monastery’s identity thus reflects the fundamental practices on the Lord Buddha’s path to liberation: sīla, samādhi and paññā; the same practices which form the basis of daily life in our monastic community. Conceptually, the overall design of our logo projects a back-to-basics simplicity, an inward focus aimed at achieving spiritual perfection. Forest Dhamma Monastery has a disciplined and orderly feeling, but at the same time it is not rigid and formal. It is even and balanced, in the natural way of the middle path.